My account
My account
Profile
Addresses
Checkout Options
My orders
Log Out
Shopping Cart
Your cart is empty
Looking for inspiration?
Our special offers
RP95
JR17.5 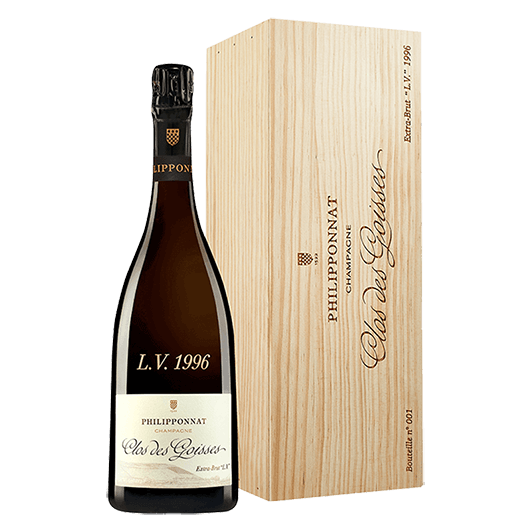 Established for nearly five centuries in Mareuil-sur-Aÿ, the Philipponnat Champagne House is one of the historic names in the Champagne region. Singularity, excellence, generosity and simplicity are the values that guide this house, which has remained a family-owned business. Owned by the house since 1935, the mythical Clos des Goisses is one of the oldest and most prestigious plots in the Champagne region. This utter gem is the source of rare and exceptionally powerful champagnes.

The Philipponnat Champagne House watches over an exceptional 20-hectare vineyard composed of Premiers and Grands Crus in Aÿ, Mareuil-sur-Aÿ and Avenay. The Clos des Goisses spreads across 5.83 hectares of vines and is situated on a 45° slope and planted with Pinot Noir and Chardonnay vines. The name stems from the old Champagne dialect "gois", which means a very steep hillside. Resting on pure chalk soils and facing south, the Clos des Goisses is one of the warmest terroirs in the Champagne region. The plot’s average temperatures are 1.5°C higher than in the rest of the region. Due to its steep slope, the Clos des Goisses vineyard is worked by hand and the plots are rigorously monitored, excluding the use of synthetic herbicides and insecticides. The soil is worked with ploughing and weeding.

With its unique name, the Clos des Goisses L.V. 1996 by Philipponnat pays tribute to both time and perfection. Produced in very limited quantities and resulting from a rigorous selection of plots, this exceptional cuvée, whose initials stand for "Long Vieillissement", is aged for 25 years in the house’s cellars and then disgorged for six to nine months before being being released onto the market. Each bottle is presented in a sophisticated numbered wooden case.

Mild, dry and sunny, January gave way to a grey and particularly cool February. The frost episode on February 22nd, thanks to the northern wind that favoured the circulation of cold air, did not affect the vineyard. Although budbreak was recorded in mid-April, new episodes of frost along with thunderstorms and hail were recorded in early May. Although the warm and sunny conditions at the beginning of June favoured an even flowering period, very cool temperatures on June 19th slowed down the flowering and caused millerandage, particularly on the Chardonnay grapes. The summer was marked by alternating rain and hot spells. September was sunny. The harvest began on September 14th and the grapes were harvested at full maturity, thus giving rise to a great vintage with an appealing balance, sustained by a smooth acidity.

Partial vinification in wood. Malolactic fermentation is not carried out in order to preserve the natural acidity of the wine and to offset the powerful expression of the terroir.

This champagne showcases a beautiful golden colour. The effervescence is very fine.

The nose gives off powerful fragrances of candied fruit, coffee and cocoa.

Ample, the palate seduces with its exceptional length and its finish that exudes delicious notes of brandied fruit.

Other wines that Could be of interest to you