Established since 1825 in the Nuits-Saint-Georges area, in the heart of the Côte de Nuits, the Faiveley family is today at the helm of one of the most beautiful estates in Burgundy. Since...Read More

Established since 1825 in the Nuits-Saint-Georges area, in the heart of the Côte de Nuits, the Faiveley family is today at the helm of one of the most beautiful estates in Burgundy. Since 2005, it has been up to the seventh generation of this influential wine family – represented by Erwan Faiveley and his sister Eve Faiveley since 2014 - to pursue the standards of excellence specific to this great Burgundy estate. They do so with great passion and commitment to the values set forth by previous generations of Faiveley men and women. And in doing so, they help secure the estate for future generations of the family.

With a vineyard expanding over more than 120 hectares of vines, divided between the Côte de Nuits, the Côte de Beaune and the Côte Chalonnaise, Domaine Faiveley boasts quite an exceptional wine heritage. Their vineyard property includes some of the best Grand Cru and Premiers Cru plots, where Chardonnay and Pinot Noir flourish.

Through a combination of tradition and modernity, Domaine Faiveley produces fantastic Burgundy wines. The vines are managed by means of sustainable viticulture, in order to preserve the diversity of the flora and fauna in the natural environment.

Under the direction of Jérôme Flous, the Winemaking & Vineyard Director at Domaine Faiveley, all stages of the winemaking process are carried out with the utmost care and precision. Harvested by hand at perfect maturity, the grapes are sorted and selected at the estate before continuing their vinification, with the unique identity of each plot and grape variety respected at each stage. Pigeage is carried out manually, according to tradition. The wines are then aged for 12 to 18 months in French oak barrels using Burgundy barrels adapted to the expression each vintage.

Offering a wide range of wines marked by great accuracy and precision, Domaine Faiveley is an essential reference for Burgundy wine lovers. 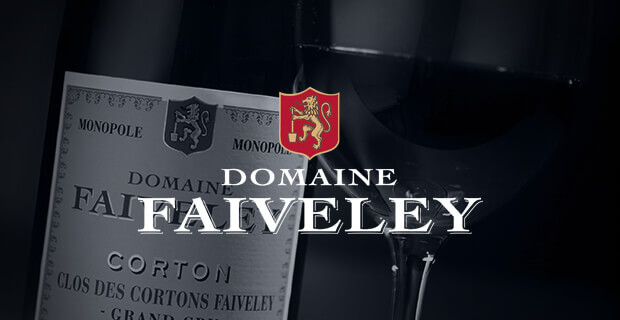 Established in the heart of Burgundy since 1825, Domaine Faiveley combines with remarkable grace two seemingly opposing principles: a vast, 300-acre empire of vines stretching from the Côte Chalonnais all the way up to Chablis on the one hand, and a terroir-specific approach with individual attention on each vine plot on the other. Managed today by Erwan and Eve Faiveley, who represent the 7th generation of their family business, this world-renowned estate produces a dazzling portfolio of Pinot Noir and Chardonnay wines from a collection of terroirs generously studded by prestigious Grand Cru and Premier Cru plots. In doing so, two centuries of winemaking savoir-faire are seamlessly blended with an innovative, modern approach, resulting in wines of great purity that offer faithful reflections of their terroirs of origin.

The history of Domaine Faiveley spans 7 generations, dating back to the founding of a wine merchant business by Pierre Faiveley in the year 1825. Born in the village of Nuits in Burgundy, Pierre was a cobbler by trade with a passion for ageing and trading wines. Eventually, he decided to purchase his own vineyard parcels in Nuits-Saint-Georges, grow his own vines and vinify his own wine. Pierre’s nephew Joseph Faiveley took over from his uncle next, and gave his name to the family business. Joseph’s love for travel and his adventurous spirit led him to Northern Europe, Belgium and the Netherlands in particular, where he began exporting his wine and trading it for textiles. Back home in Burgundy, he continued to oversee his uncle’s estate, expanding it through the purchase of parcels like the Nuits-Saint-Georges Premier Cru Les-Porêts-Saint-Georges and the Monopole Corton Clos des Cortons Grand Cru, the latter of which has since then become an emblematic property of the estate. Joseph remained in a hands-on role at the property until the age of almost 90 years old, building a strong foundation for Domaine Faiveley.

In 1889, Francois Faiveley took over at Domaine Faiveley, dedicating most of his life to rescuing the vines of the estate from the ravages of phylloxera, which hit Burgundy toward the end of the 19th century. In 1893, Francois purchased the Nuits-Saint-Georges Premier Cru Les-Saint-Georges and in 1911, the Clos-de-Vougeot Grand Cru plot. Taking over Domaine Faiveley in 1919 was Georges Faiveley, most fondly remembered for co-founding in 1934 the Confrérie des Chevaliers du Tastevin, a brotherhood dedicated to the celebration of Burgundian culture, cuisine and wines. Following the economic crisis of the early 1930’s, the Confrérie saw a kind of revival of Burgundy. Georges also expanded the estate through the acquisition of several prestigious Premier Cru and Grand Cru climats and the lease of several more. Georges’s son Guy Faiveley took over reigns of the estate in 1947, becoming Grand Master of the Confrérie des Chevaliers du Tastevin and meeting several famous individuals, such as the Apollo 9 flight crew, during this time.

Francois Faiveley took over the family business at the age of 25 in 1976. A passionate winemaker, he made great improvements to the winemaking at Domaine Faiveley, as well as expanding it with vine parcels in the Montagny and Mercurey appellations. Today, Domaine Faiveley is run by Francois’s son Erwan Faiveley, who took over from his father in 2005 and made it his first mission to invest into modernising the estate facilities. With the 2007 vintage, Erwan hired Jérome Flous as Chief Winemaker of Domaine Faiveley and ushered in a new style for the estate’s wines, a style that would become its signature. In 2014, Erwan’s sister Eve Faiveley joined, become the first female Faiveley involved in the family business.

Together, Erwan and Eve carry on the legacy built by their ancestors: to produce terroir-driven wines through a combination of traditional savoir-faire and a modern approach to winemaking. The estate, now one of the largest in Burgundy, has continued to expand with some of the most recent acquisitions being 20 hectares of vines in Gevrey-Chambertin, including the Charmes-Chambertin Grand Cu and the Gevrey Chambertin premier Cru Les Lavaux-Saint-Jacques.

Out in the Vineyards of Domaine Faiveley

Today, Domaine Faiveley is one of the largest estates in Burgundy, with 130 hectares (321 acres) spanning from their headquarters in Nuits-Saint-Georges to the Côte de Beaune, throughout the Côte de Nuits, Côte Chalonnaise and even Chablis. Out of this, an impressive 10 hectares (25 acres) are Grand Cru vineyards (for example, in Bâtard-Montrachet, Corton, Musigny and Clos de Vougeout), though as Burgundian tradition dictates the properties are very fragmented with no single Grand Cru site larger than 1 hectare. This results in a dazzling array of very different terroirs, translating to a huge variety within the Domaine Faiveley portfolio.

The vineyards of Domaine Faiveley are cultivated using sustainable methods of viticulture and an approach driven by ethical values. Each plot is assigned to a different individual or team, who develops, over time, a deep understanding of that plot and the needs of the vines planted there. All of the vineyards are ploughed to extract mineral resources and help conserve the microbial life of the soil. The soil is treated with natural fertilisers produced from organic materials collected in the vineyards, rather than harmful chemicals. Great care is also taken to help preserve the biodiversity of the ecosystems surrounding the vineyards, including the 7 hectares of forests called the “Montots” woodland, which served as an efficient natural carbon sink. The vines are Guyot-pruned quite short and undergo thorough debudding in the spring, followed by leaf stripping in the summer. Precise weather forecasting tools allow the teams to anticipate threats of disease in the vineyards and respond with preventive treatments.

The vineyards of Domaine Faiveley are planted with the two iconic grape varieties of Burgundy: Chardonnay and Pinot Noir, along with some Aligote. The estate also purchases around 15-20% of its grapes from other growers in Burgundy. Unlike most estates in Burgundy, Domaine Faiveley produces more Pinot Noir than Chardonnay, with around 70% of their portfolio dedicated to red wines.

Combining Tradition and Modernity at the Domaine Faiveley Cellar

The best way to describe winemaking at Domaine Faiveley is “traditional with a modern twist.” After Chief Winemaker Jérome Flous determines the best date for harvest, the grapes are manually collected by teams of pickers with the aid of the estate’s vineyard workers. The fruit is sorted by hand before being transferred by a gravity-fed system to custom-designed wooden vats. The ratio of whole clusters to destemmed ones depends largely on the fruit’s terroir of origin and the specific characteristics of the vintage. A natural vinification follows, with indigenous and selected yeasts. While Erwan has shifted the Faiveley style for red wines to a more gently extracted, pure profile, the fruit is still regularly pumped over while undergoing fermentation. Following alcoholic fermentation, the grapes are gently pressed. Deep in the 19th century vaulted cellars of Domaine Faiveley, the wines are aged in French oak barrels for a period of 12 to 18 months. The Pinot Noir wines of Domaine Faiveley provide a remarkable blend of elegance, concentration and precision on the palate.

Depending on the appellation, the white Chardonnay wines of Domaine Faiveley are fermented partially in French oak barrels (of which some percentage is new oak). Ageing is carried out with regular stirring in a combination of vats and oak. The result is a silky and powerful white wine which balances purity, minerality and tension.