Chateau Calon Segur name is derived from the old French word Calon which was boat used in the Middle Ages to transport timber from one side to the other of the Garonne, and from the Marquis de...Read More

Chateau Calon Segur name is derived from the old French word Calon which was boat used in the Middle Ages to transport timber from one side to the other of the Garonne, and from the Marquis de Segur who owned the Chateau in the early 18th century. The Third Classified Growth in the appellation of Saint-Estèphe remained in Capbern-Gasqueton family throughout the 19th century until 2012. Chateau Calon-Segur continues to produce wines with an inimitable style marked by the typicity of the appellation.

In the northernmost tip of Saint-Estèphe, a thick, smooth, gently-rounded stone wall winds its way gently around a 136-acre vineyard, all in one piece. Almost 4,000 feet long and over 3 centuries old, it enfolds the eternal “l’Enclos” parcels of Château Calon Ségur, as well as the estate’s magnificent, mysterious Chartreuse. The Calon Ségur of today offers an elegant, balanced, fine-tuned expression of a great gravel and clay terroir through noble Cabernet Sauvignon, a flagship grape that is granted ever greater pride of place. 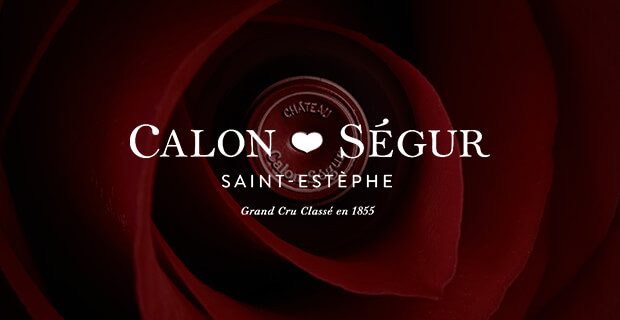 A bouquet of taut-skinned black cherries, red roses and molten dark chocolate enchant the nose, while silky, concentrated tannins stretch over the palate, gripping it softly into a long, spicy finish. These wines are destined to be opened at the table, pairing beautifully with your favorite hearty autumn roasts and stews.

The History of Château Calon Ségur, the Great Love of the Marquis de Ségur

One of the oldest properties of the Médoc region, Château Calon Ségur dates back to the Gallo-Roman era. Archives from Bordeaux University have shown that the estate paid taxes on wine production as early as the 12th century. The first part of the château’s name comes from the word “calones,” which refers to small river skiffs used to navigate the Gironde estuary during the Middle Ages.

The second part was added in honour of the Marquis Nicolas-Alexandre de Ségur, who acquired the estate in the 18th century. Owner also of Lafite, Latour and Mouton, the Maquis de Ségur was one of the most influential characters in Bordeaux’s history, nicknamed “the Prince of Vines” by Louis XV. His love for “Calon” is perfectly expressed by a sentence that has since shaped the estate’s history: “I make wine at Lafite and Latour, but my heart is at Calon.” This quote has since inspired the identity of the château, symbolised by a heart engraved on the stone façade of the cellars in the 19th century and pictured on the label of the estate’s wine since the beginning of the 20th century.

Following the death of the Marquis in 1755, the property changed hands between the Dumoulin family and Firmin de Lestapis. The 55-hectare (136-acre) estate was already regarded as one of the top wine producers of the Saint-Estèphe appellation and was classified as a Third Growth in the famous 1855 Classification of the Médoc and Graves. In 1894, Georges Gasqueton and Charles Hanappier acquired the Château Calon Ségur, which would stay in the Gasqueton family for over a century. During this time, the family carried out a major renovation projects both in the cellars and out in the vineyard, starting in 1995.

Following the death of Madame Denise Gasqueton, the property was acquired by Suravenir, a subsidiary of the insurance company Credit Mutuel Arkea, in 2012. Since then, major investments have resulted in a new vat cellar and barrel room, inaugurated in time for the 2016 harvest. The vineyard was restructured and a replanting project launched, with pride of place given to the estate’s flagship grape varietal, Cabernet Sauvignon. The estate’s picturesque Chartreuse, whose origins still remain a mystery today, was also restored and new life breathed into its majestic gardens.

In the Walled “Eternal” Vineyard of Château Calon Ségur

The most northerly of all the Médoc Classified Growths, Château Calon Ségur is situated in the Saint-Estèphe appellation on the Left Bank of Bordeaux. The Château Calon Ségur vineyard is truly unique in that its vineyard of 55 hectares (136 acres) has remained in one piece since the 1855 Classification, a consistency of terroir that is difficult to find in Bordeaux these days. The vines are planted in a single block around the Chartreuse, surrounded by a thick, gently-rounded stone wall originally built in the 18th century. Stretching over 1,200 meters (3,937 feet), this wall has remained an unchanging feature of the estate and has helped forge the identity of Château Calon Ségur.

The vineyards of Château Calon Ségur are established on three outcroppings of gravel. The terroir here is characterised by a thick layer of easy-draining gravel soil, originally deposited by the Gironde during the Quaternary Era, over a subsoil made largely of clay and formed during the Tertiary Period. The topsoil features a fine layer of Lacustrine clay. This combination of gravel and clay soils is credited for the beautiful balance of power and elegance in the wines of Calon Ségur.

Today, the vineyard is planted with 56% Cabernet Sauvignon, 35% Merlot, 7% Cabernet Franc and 2% Petit Verdot, with the vines aged 22 years on average. The goal of the vineyard team is to have Cabernet Sauvignon represent 70% of the total plantings by 2032. Each new year, this variety is replanted at high density, roughly 10,000 vines per hectare. The true flagship of the estate (sharing the same initials), Cabernet Sauvignon has, for over a decade, represented three-quarters of the final blend in the château’s First Wine, and up to 90% in some of the most successful vintages.

The vineyard team at Château Calon Ségur has adopted an environmental management system (SME) aimed at reducing the estate’s impact on the natural environment. This sustainable approach to viticulture has resulted in the optimization of water and energy resources, the management and recovery of waste and effluents, and improvements in working conditions, among many other benefits.

SME is coupled with precision viticulture, which relies on tools like satellite imagery to fine-tune the treatment of the vines on an individual basis. The vineyard pathways are planted with cover-crops and some parcels are left to lie fallow as a way to encourage greater biodiversity in the vineyard ecosystem. In fact, at any given time only 45 hectares of the total 55 hectares are actively in use to produce wine. All these efforts have earned Château Calon Ségur the ISO 14001 and HVE 3 certifications.

Following a manual harvest, the grapes arrive to the harvest reception platforms on the upper part of the two-story winery, designed with gravity-flow winemaking in mind. Here they are de-stemmed, hand-sorted and cooled to 12°C before being filled into the vats on the lower level using gravity flow (no pumps). The Château Calon Ségur winery is home to a collection of 75 stainless steel vats, ranging in size from 5 to 120 hectolitres to allow for very precise plot-by-plot winemaking. Pre-fermentation maceration and cold soaking takes place for 18 to 21 days before alcoholic fermentation can begin.

Forever in search of finesse in the wines, the Calon Ségur team has abandoned the traditional punch-down techniques (pigeage) and has applied more moderate pump-overs (remontage) during the winemaking process. Combined with the complete absence of pumps, these techniques have allowed for a greater preservation of the fruit’s integrity, resulting in wines that are purer, softer and more balanced in style.

The Château Calon Ségur first-year barrel room holds 1100 barrels, where the wines spend the first phase of their maturation process. Hidden inside two large casks are a set of stairs and barrel lift leading down to the second-year barrel room. Both levels are equipped with strict temperature and humidity control, allowing the winery team to closely monitor the maturation process. Situated 35 meters underground, between the vat room and ageing cellars, a gallery holds the greatest treasures of the estate, a collection of old vintages beautifully preserved over time.

While historically the wines of Château Calon Ségur have been known as sturdy and masculine, with big, brawny shoulders and concentrated tannins that took decades to soften, the estate style began to evolve in the past decade under the direction of château Manager Laurent Dufau and Technical Director Vincent Millet. While the structure and body in these wines have been maintained, Calon Ségur today offers a more elegant, balanced, fine-tuned expression of its great Médoc terroir through noble Cabernet Sauvignon that is granted ever greater pride of place.

The Château Calon Ségur Grand Vin is a pure expression of its terroir of origin, combining a certain volume and intensity with the elegance of Cabernet Sauvignon from Médocain gravel soils, all in perfect balance. A deep garnet-purple in the glass, this Saint-Estèphe reveals warm black fruit (black cherries, cassis and blackberries), along with touches of black liquorice, red roses and molten dark chocolate. On the palate, it packs a medium body with great concentration, which thins out very slowly and gradually on a long, slightly spicy finish. Pair this bold and beautiful Saint-Estèphe with a hearty stew of wild boar and root vegetables, a slow-cooked leg of lamb or beef filet served with wild mushrooms.

The estate’s Second Wine, Marquis de Calon Ségur, is a fantastic introduction to the estate’s style in a wine that is ready to drink at a younger age. With slightly more Merlot in its blend than in that of its older brother, this Saint-Estèphe offers a rich bouquet of jammy, syrupy black fruit (chocolate-covered cherries and black raspberries), along with floral touches of violet and earthy hints of underbrush. On the palate it is delicately firm with silky tannins and a fresh, layered black fruit core leading to a fragrant finish.