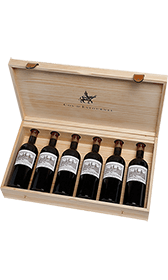 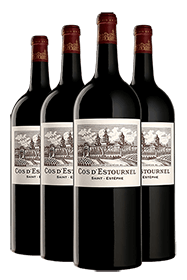 The superb pagodas of Cos d'Estournel sit on the heights of Saint-Estèphe. Louis-Gaspard d'Estournel, known as "The Maharajah of Saint-Estèphe", inherited this estate. Founded in 1811, the estate is located on the Cos hillside and was gradually shaped by this visionary who went to the four corners of the world to bring his wine and to win new customers. Even today, the estate benefits from a terroir of great complexity and incredible richness. The 91-hectare vineyard is made up of a mosaic of 61 parcels that is planted with two-thirds Cabernet Sauvignon and the rest completed with Merlot, and a small proportion of Cabernet Franc and Petit Verdot.

Since 2000, Cos d'Estournel, a Second Classified Growth of 1855, belongs to Michel Reybier. Anxious to continue the work of its founder and take a decisive technical lead, he constructed the first vinification cellar with a gravity system in 2008. From the reception of the harvest to the bottling, the whole process takes place without a single pump. This avoids excessive handling of the juice. This new technology is part of a quest for excellence in the field and it allows the handling of grapes with a greater respect. From the great terroir of Cos d'Estournel come three wines: Grand Vin Cos d'Estournel, Pagodes de Cos and Cos d'Estournel Blanc.

Undeniably one of the most iconic wine estates of the Saint-Estephe appellation, Château Cos d’Estournel has long seduced lovers of Bordeaux with its sultry, spicy, intensely flavoured wines. Imbued with its founder’s adventurous spirit and love of mysticism, this legendary estate stands out among the rest in so many ways… 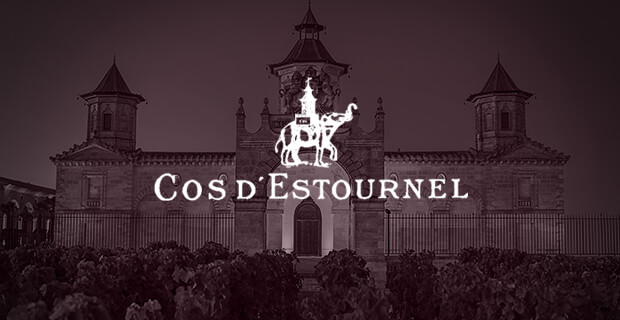 The exotic pagodas gracing its monumental palace, the dazzling diversity of its cherished terroirs, the state-of-the-art technology guaranteeing the most delicate possible winemaking in the brand new, 100% gravity-fed winery. Cos d’Estournel is truly a wonder to behold, a singular and fascinating Saint-Estephe just waiting to be discovered.

The History of Château Cos d’Estournel, an Emblematic Saint-Estephe

The story of Château Cos d’Estournel begins in 1811, when Louis Gaspard d’Estournel purchased several hectares of vines to add to land he already owned near the village of Cos. Under the name Cos d’Estournel, he began producing wines that quickly became known for their high quality and were widely exported, even reaching Calcutta by the 1830’s. Occasionally, some unsold bottles would be returned to the estate, where they were found to be even tastier than when they had first shipped out. These wines, specially labelled “R” for “Returned from India” had rested in bottle during their voyage, developing complex aromas as they aged.

The wines of Cos d’Estournel eventually gained fans in the royal courts of Queen Victoria, the Russian Tsar and Napoleon III, not to mention the Maharajahs and Nabobs of India. The founder’s adventurous spirit, his love for the Orient and all things exotic, earned him the nickname “the Maharajah of Saint-Estephe,” and he erected a magnificent palace in Saint Estephe, truly fit for a maharajah. Still considered one of the cultural gems of the appellation, the palace of Cos d’Estournel was deeply inspired by the architecture of the Far East, featuring a series of monumental pagodas, ornamental elephant statues and a magnificent, sculpted “Buland Darwaza” main door, imported from the palace of the Sultan of Zanzibar.

In 1852, Louis Gaspard d’Estournel succumbed to mounting debt and sold the property. The founder died just one year after, and, regrettably, just two years before the famous 1855 classification, which ranked Château Cos d’Estournel as a Second Classified Growth of Saint-Estephe. The property changed hands several times through several events in the 19th century, belonging to a London banker called Martyns, then the Errazu family from Basque Country, and the Hostein brothers after that. In 1917, Cos was purchased by Fernand Ginestet, whose family (along with the Prats family and Bruno Prats) kept the estate in good shape through difficult times, until its acquisition by Michel Reybier in 2000. At the end of 2012, Aymeric de Gironde (former marketing director for Châteaux Pichon Longueville, Suduiraut and Petit Village) became the estate’s manageing director, taking over from Jean-Guillaume Prats.

The Cos d’Estournel estate lies to the south of the Saint-Estèphe appellation in the northern Médoc, on the border of the Pauillac appellation, on the Left Bank of Bordeaux. In fact, the vineyards are separated from those of Lafite Rothschild only by the narrow Jalle du Breuil stream. Situated between the Gironde Estuary and the Atlantic Ocean, Saint-Estephe enjoys a distinctly oceanic climate, which protects the vines from extreme weather conditions. Another feature of the appellation’s climate is a wind that blows through the vineyards here, drying out the excess humidity and preventing the spread of mildew. The property expands over 100 hectares of vineyards, including a plateau of deep gravel and two hills of gravelly and clayey soils, offering south-southwestern and eastern exposures, along with excellent drainage.

The classic grape varieties of Bordeaux find their home in this rich mosaic of soils and exposures, which are ideally suited to their cultivation. Around two-thirds of the property is planted with Cabernet Sauvignon vines, grown in the gravelly soils at the top a hill of pebbles and its southern slopes. The remaining one-third is dedicated to Merlot, found in the east-facing slopes and clay-limestone soils. A small portion of the property is also home to vines of Cabernet Franc and Petit Verdot.

The average age of the vines is quite high (45 years), and kept that way through massal selection, by which the shoots of Château Cos d’Estournel’s older vines are used to grow the younger ones. This allows certain vine characteristics - also the defining characteristics of this historical estate - to be preserved from one year to the next. The density of the vines is also pretty high, at 8,000 to 10,000 vines per hectare. Such high density and the naturally low yield of old vines results in a beautiful concentration of aromas in the fruit harvested from the vineyards of Cos d’Estournel.

In 2001, a study was carried out in the vineyards of Cos d’Estournel, intended to map out the vast array of soils, which are now known to include around twenty distinct variants. The plots of the estate have been carefully subdivided based on the grape variety and age of the vines, their exposure to the sun, and the quality and composition of the soil. This meticulous analysis resulted in a more in-depth knowledge of each micro-terroir, allowing the team to adapt their techniques to the unique needs of each plot. Such a hands-on approach to viticulture makes possible a precise and tailored treatment of the vines, yielding distinctive batches of base wines to be used in the signature blend. In order to further maximise the level of understanding of the vines, each of the estate’s vine-growers are entrusted to the same 10 plots (around 40,000 vines) year after year.

The State-of-the-Art Winery of Château Cos d’Estournel

Along with its emblematic palace and idyllic terroir, Cos d’Estournel has become known for fully embracing modern technology in the production of its wines. In 2003, the estate implemented isothermal vats whose truncated cone shape allow for a more homogenous extraction during fermentation. Today, Château Cos d’Estournel is home to 72 of these temperature-controlled vats, a testament to the importance placed by the team on parcel-by-parcel vinification. These vats are housed in the estate’s brand new, state-of-the-art, 2000 m2 cellar, which was completed in 2008-2009.

The entire winemaking process, from the reception of the grapes after harvest to the bottling of the finished wine, takes place without the use of a single pump. Even the “pump-over,” traditionally impossible without the use of pumps, is done by means of gravity: the free-run juice is drained out and moved up a floor in one of four glass elevators, before being poured back over the marc. The gravity-fed winemaking process allows for the gentlest possible treatment of the grapes and their juices, resulting in finished wines with more refined tannins and a more genuine expression of vintage and terroir.

Located one level below the vat room is the barrel cellar, home to some 1,500 oak barrels which are kept in tightly monitored conditions. This room is fully insulated and the temperature maintained at a maximum of 59 °F. An inner chamber contains the barrels housing the estate’s white wines, which are kept at a lower temperature. And an elaborately carved wooden door leads to a truly special space where the most precious treasures are stored: the oldest vintages of their wines, ageing peacefully in their bottles.

The Signature Style of Château Cos d’Estournel
The namesake First Wine of Cos d’Estournel is a blend of around two-thirds Cabernet Sauvignon and one-third Merlot with touches of Cabernet Franc and Petit Verdot included as well. Grapes from mature plants are blended with fruit from younger vines in order to produce this signature cuvee, with the average age of the vines included being around 55 years old. The wines are aged in oak barrels, of which around 80% are new. Château Cos d’Estournel is a dense, deep and intense wine with spicy aromas beautifully balanced by the fruit. On the palate, this wine reveals silky tannins, which lead into a long finish.

Since 1994, the estate has also produced a Second Wine called Les Pagodes de Cos, made with grapes from vines that are 35 years old, on average. Dedicated to the simpler pleasures in life, this wine is lively and energetic, with intensely fresh fruit revealing itself on the palate.

The Château Cos d’Estournel Blanc, whose inaugural vintage was in 2005, is a blend of around 80% Sauvignon Blanc and 20% Semillon. This wine offers complex fruity aromas of fig, lemon zest, mango and apple, the perfect vivacious Bordeaux white to pair with a wide range of dishes. Finally, the estate also produces a wine named Goulée by Cos d’Estournel, characterised by intense red fruit flavours and smooth tannins on the palate.