The Chave family has been producing wines in the northern Rhône Valley for 16 generations, gradually purchasing vineyard properties in the Saint-Joseph and Hermitage appellations. Gerard Chave...Read More

The Chave family has been producing wines in the northern Rhône Valley for 16 generations, gradually purchasing vineyard properties in the Saint-Joseph and Hermitage appellations. Gerard Chave took over the family business in 1970 and forged an international reputation for the estate's wines, also expanding its land holdings in Hermitage to 14 hectares (35 acres). Gerard's son, Jean-Louis Chave joined the family company in 1992, continuing the family's tradition of purchasing and replanting vineyards, and also founded the family's negociant label JL Chave Selection.

At the heart of the Jean-Louis Chave estate is the diverse mosaic of parcels. In Hermitage, their 35 hectares of vineyards are spread across 9 "lieux-dits," some of which are home to very old Syrah vines (up to 60 years of age). These vineyards are managed organically and the wines produced with minimal intervention winemaking. The estate relies on 16 generations of savoir-faire to produce the Jean-Louis Chave flagship Hermitage Red and White wines, incredibly complex blends of grapes harvested in these many different lieux-dits.

Their Hermitage red is based on rich and ripe Syrah from the clay and limestone soils of the Meal and Bessards Vineyards. Meanwhile, the Hermitage white is produced from mostly old vine Marsanne from the family's Peleat monopole plot, along with Roussanne. This is a Hermitage white wine a remarkable potential for age, evolving layered, nuanced aromas over time. The estate's Saint-Joseph red is produced from the historical center of this prestigious appellation, and offers gorgeous blackberry, olive, violet and smoky aromas.

The Jean-Louis Chave range also includes wines from all over the northern Rhone, including a Côtes-du-Rhone blend "Mon Coeur," Crozes-Hermitage "Silene," and "Offerus from fruit harvested in Mauves and St-Jean-de-Muzols.

Praised by wine critics world-wide, the wines of Jean-Louis Chave are best known as capturing the essence of the iconic Hermitage and Saint-Joseph appellations in the glass, as well as offering wine lovers a taste of some of the other wine producing areas of the northern Rhône.

Domaine Jean-Louis Chave | A Pillar of the Northern Rhône Valley 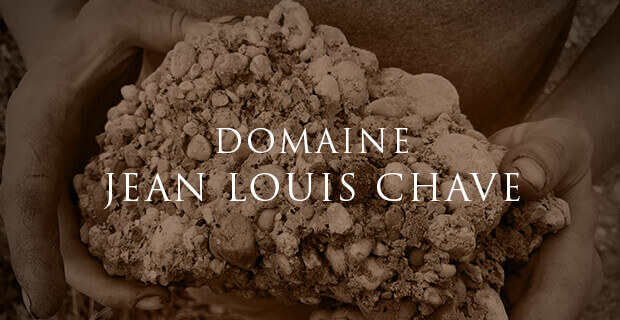 Representing the 16th generation of winegrowers and winemakers in a family whose name has become synonymous with excellence in the northern Rhône Valley, Jean-Louis Chave is today at the helm of an estate producing some of the most beloved and widely sought-after wines of Hermitage and Saint-Joseph. At the heart of the family business is the art of blending: producing an array of single-parcel base wines from the dazzling mosaic of Hermitage “lieux-dits” and combining them in a way to produce a blend astronomically greater than the sum of its parts. The result? Masterfully balanced, unbelievably complex Syrah reds and rich, age-worthy Marsanne-Roussanne whites – wines only possible as a product of over 500 years of family winemaking experience.

Situated on a quiet little street in the sleepy village of Mauves, in the heart of the Ardèche department of southern France, the Jean Louis Chave headquarters has the air of a place that has been around forever. And that’s because it pretty much has. The Chave family has been producing wines in the northern Rhône Valley since 1481, beginning in the area we now know as the Saint-Joseph appellation. Over time, they began purchasing land on the Hill of Hermitage. They made the official move to Hermitage in the latter half of the 19th century, following the phylloxera outbreak that devastated the region, driving down land prices in Hermitage.

Representing the 15th generation of Chave winemakers, Gérard Chave took over from his father in the early 1970’s, and is largely credited for forging the international reputation for the family business. Gérard also increased the size of the Hermitage vineyard to 14 hectares (35 acres), making it the largest estate on the Hill of Hermitage after M. Chapoutier, Paul Jaboulet Ainé and the cooperative cellars Cave de Tain l’Hermitage.

In 1992, Gérard’s son Jean-Louis Chave joined the family business, after completing his studies at UC Davis in California. Jean-Louis made it his mission to diversify the family’s vineyard holdings. He reinvested in clearing and replanting the Bachasson hillside in the Saint-Joseph appellation, which is where his ancestors first began producing wine, after a local lord donated to them a vineyard plot in return for “services rendered.” In 2009, the estate acquired the walled Clos Florentin vineyard in Saint-Joseph, where there have never been any chemical fertilisers used, and began the back-breaking task of replanting it. The family also purchased an estate owned by their friends, the Florentins, which includes the legendary plot Clos de l’Arbalestrier. Jean-Louis has also founded a very successful negociant label by the name of JL Chave Selection, which includes accessible, easy-drinking wines like Celeste from Saint-Joseph and Mon Coeur from the Côtes du Rhone.

Key to the great success enjoyed by the wines of Jean-Louis Chave is the diversity of terroir in their many different parcels and the 16 generations of savoir-faire that guide Jean-Louis’s hands when making the blends. In total, the Chave family runs 35 hectares of vines in Hermitage, of which about two-thirds are planted in red and the rest in white. These plots are spread across 9 out of the 18 total “lieux-dits” of Hermitage, including some of the very best, like Le Meal and Baumes, which are both home to 60-year-old Syrah vines. The vineyards are cultivated organically, with methods that favour very low yields and full ripeness, followed by minimal intervention in the winemaking process. The fruit from each of these parcels is partially destemmed and vinified separately in a combination of wooden vats and cement cuves.

And this is where the unparalleled savoir-faire of the historical family estate comes in: the creation of the perfect blend to reflect the overall character of the Hermitage terroir, as well as the vintage. Each year, many hours of thought, conversation and trial go into creating the final blends of the Jean-Louis Chave flagship Hermitage Red and White wines. While the percentages of fruit included from each lieux-dit vary from one vintage to the next, the estate’s Hermitage red has at its core the rich ripe Syrah from the rich clay and limestone soils of the Meal Vineyard and Bessards Vineyard, characterised by steep, granitic slopes. The Jean-Louis Chave White is made with a base of old vine Marsanne, producing rich and intense fruit, from the Peleat monopole vineyard, with around 15-20% Roussanne added to complete the blend. The art of blending is at the heart of the wines of Jean-Louis Chave. By carefully choosing the level to which each of the estate’s terroirs will be represented in the final blend, the team manages each year to produce wines that are perfectly balanced between aromatic complexity, finesse and power.

The wines are matured in a combination of large wooden foudres and smaller wooden casks, the proportion of how much new oak used dependent on the specific cuvée and vintage. The wines of Jean-Louis Chave are all bottled unfiltered.

The wines of Jean-Louis Chave are firm critic favourites, widely praised for so accurately capturing the essence of the legendary Hermitage Hill and Saint-Joseph in the northern Rhône. The estate is perhaps best known for their flagship Hermitage Domaine red and Hermitage Domaine white wines. These wines are endlessly complex, with a surreal balance of richesse and finesse, depth and elegance. The white is surprisingly long-lived, developing an incredibly nuanced expression as it aged. In an extremely limited quantity of around 200 cases a year and only in the very best vintages, Chave also produces the Cuvee Cathelin from the same lieux-dits as their Hermitage Red but in a different blend. Along with these flagship Hermitage masterpieces, the Domaine Jean-Louis Chave also produces a traditional Saint-Joseph red, with beautifully round black raspberry, violet, olive and wood smoke aromas, from vines planted in the historical centre of this appellation.

The JL Chave Selection negociant label created by Jean-Louis also includes a range of wines produced from grapes that are sourced from different plots in the northern Rhône, offering wine lovers a chance to discover the savoir-faire of the estate through a more accessible collection. The label includes “Mon Coeur,” Côtes-du-Rhône that blends excellent plots in Visan, Vinsobres, Estargues and Buisson, and the “Silene” Crozes-Hermitage, composed of 50% estate Syrah and 50% purchased grapes. “Offerus” is made from vines in Mauves and St-Jean-de-Muzols and not completely de-stemmed, which adds a nice grip to tantalising flavours of cassis, raspberry and olive tapenade.

Considering the knowledge and expertise gained from being the 16th generation in his family to produce wine in this area, it is clear that Jean-Louis can do no wrong when it comes to expressing the majestic terroirs of the Rhône Valley in the glass, be it through these entry-level cuvées or the mighty Hermitage and Saint-Joseph flagships bottled under the domaine label.