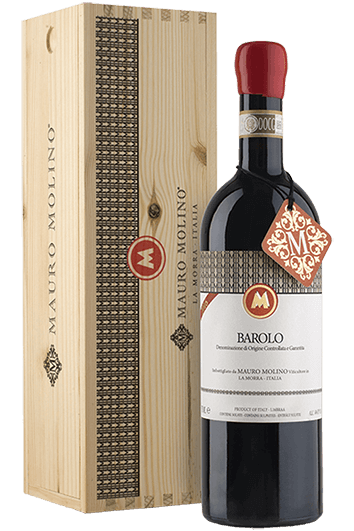 Mauro Molino decided to found his estate in the early 1980s in La Morra, an emblematic village in Piedmont. Dedicated to the cultivation of his vineyard and always striving for excellence, Mauro Molino has succeeded in bringing to life great Barolo and Barbera d'Alba Superiore wines that have established his reputation around the world. Mauro Molino's Italian wines are true vintages, made from meticulously delimited "single vineyards", which reflect all the characteristics of the original terroir in which they thrived.

His 12 hectares of land, located in the heart of the Langhe region in Italy, are planted with Nebbiolo and Barbera grapes. The sublime Le Radici vineyard stretches from the foot of the Burio Castle in the municipality of Costigliole, one of the areas that are particularly suited to the production of Barbera d'Asti. The soil is influenced by clay and limestone.

To celebrate the 40th anniversary of the winery, Mauro Molino is unveiling a limited edition (999 bottles) Barolo Anniversario wine.

Made from the exceptional 2016 vintage, this Barolo wine, an appellation located in Piedmont, enhances the identity of the Annunziata, a historic 0.2-hectare micro-terroir, whose south-west facing vines, aged between 50 and 70 years, are planted in soils composed of limestone and sand.

Adorned with a unique label, the first designed and drawn by Mauro Molino himself in 1982, this Barolo Anniversario 2016 is a vibrant tribute to the past, present and future of this illustrious estate.

14-day skin contact maceration. The initial 20-month ageing in 10-litre French oak barrels and casks is followed by an additional 3 years of ageing before the wine is released.

For an optimal tasting, serve between 18 and 20°C.

Meat, risotto, truffle-based dishes and cheeses are all fine pairings for this Barolo wine.

Other wines that Could be of interest to you