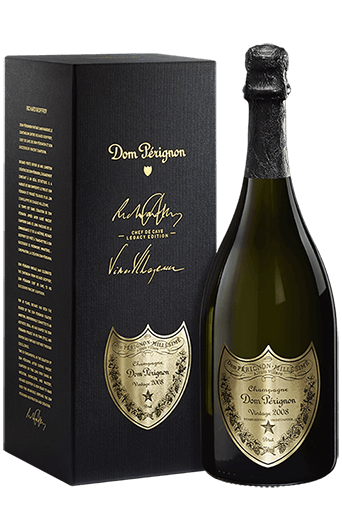 A legendary ode to Champagne

Dom Pérignon champagne owes its name to Pierre Pérignon, the famous monk and cellar master of Abbey de Hautvillers in 1668, who was also known as Dom Pérignon. Legend says that Pierre Pérignon discovered what is known today as the Champagne method. As a point of interest, he taught this method to Benedictine monk, Thierry Ruinart, in 1669, which allowed Ruinart to become the first Champagne house in 1729. Since 1st January 2019, Vincent Chaperon has succeeded Richard Geoffroy as Dom Pérignon’s Cellar Master.

Described as a true miracle in Champagne, the 2008 vintage is one of the legendary years for the illustrious Dom Pérignon Champagne House.

Already an exceptional vintage, Dom Pérignon Vintage 2008 Chef de Cave Legacy Edition pays tribute to the man who embodied the soul and continuity of the Dom Pérignon style for 28 years, Richard Geoffroy. On January 1st 2019, Vincent Chaperon, who has been his collaborator since 2005, succeeded him and became the new Cellar Master of the prestigious Champagne house.

Due to his impressive personality, the Dom Pérignon House has waited for the right moment to unveil the 2008 vintage. Comprised in a limited edition box containing the same wine as Vintage 2008, Dom Pérignon Vintage 2008 Chef de Cave Legacy Edition takes centre stage by revealing the unique and singular expression of the year 2008.

In a decade of sunny and generous character, 2008 was marked by the climatic contrasts that punctuated the year. Following months of overcast weather, the harvest took place under perfect conditions and the grapes had reached an optimal ripeness level. Aromatic purity, acidity, precision, were all attained and led to the creation of a fine champagne.

This exceptional champagne truly reveals the fullness of its personality on the palate by showing an exemplary consistency between the notes perceived on the nose and the translation of these notes on the palate. The wine's profile is long, clean, lively and warm, revealing the purity of the fruit. The sharp acidity makes the wine evolve with harmony in the mouth, a sign of a perfectly balanced champagne. The lingering mineral and smoky notes stretch out onto the finish. Both fresh and warm, Dom Pérignon Vintage 2008 Chef de Cave Legacy Edition will pair with an array of textures and flavours which will highlight its bold character.

A Champagne with a priceless heritage, marking a decisive stage in the history of the House, Dom Pérignon Vintage 2008 Chef de Cave Legacy Edition brilliantly signs the passing of the baton from one Cellar Master to another. A symbol of continuity, a creative ambition, a tribute to an already legendary champagne.

J. Robinson
19.5
20
Wine Advocate-Parker :
The finest release of this iconic cuvée since the 1996 vintage, the 2008 Dom Pérignon wafts from the glass with an incipiently complex bouquet of Meyer lemon, green apple, dried white flowers and oyster shell, with only subtle hints of the smoky, autolytic aromas that have been such a prominent signature of recent releases. On the palate, the wine is medium to full-bodied, deep and complete, its notable flesh and amplitude controlled by incisive acids, with a youthfully exuberant but elegant mousse and a long, beautifully delineated finish. Considering the sheer size of this cuvée, it's a remarkable achievement and a fitting release with which to conclude Richard Geoffroy's tenure as chef de cave. Given the 2008's intensity and balance, I suspect purists will be anticipating later disgorgements with lower dosage and more time on the lees with particular enthusiasm. Tasted three times, with consistent results.
Other wines that Could be of interest to you