A magnum of Lune d'Argent 2018 for free with your next order with the code* - SUMMER22 | Buy now *Offer valid on orders over €300, cannot be combined with other ongoing offers and does not include en primeur wines. Valid only once per customer. 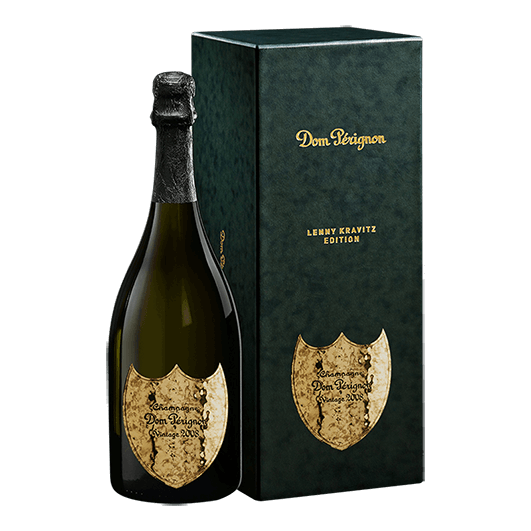 Would you wish to know when this product is back in stock?

Dom Pérignon champagne owes its name to Pierre Pérignon, the famous monk and cellar master of Abbey de Hautvillers in 1668, who was also known as Dom Pérignon. Legend says that Pierre Pérignon discovered what is known today as the Champagne method. As a point of interest, he taught this method to Benedictine monk, Thierry Ruinart, in 1669, which allowed Ruinart to become the first Champagne house in 1729. Since 1st January 2019, Vincent Chaperon has succeeded Richard Geoffroy as Dom Pérignon’s Cellar Master.

Inspired by the delicate and confidential atmosphere of champagne tasting, Lenny Kravitz has taken over the Dom Pérignon universe to create three limited edition champagnes including the Dom Pérignon Vintage Edition Lenny Kravitz 2008. His utter dedication to creativity has led him to design a tasting experience that is as refined as it is creative.

Dom Pérignon, the famous Champagne house, emphasises the power of creation by giving rise to an exclusively vintage champagne. Each year, in this emblematic region of France, Dom Pérignon attempts to select only the finest grapes in order to create a wine that revisits the Champagne archetype.

Dom Pérignon Vintage Edition Lenny Kravitz 2008 is a champagne that offers a key to reading this miraculous vintage. Under the grey and cloudy sky of this year, it is during the harvest that the miracle occurred. With generous sunshine and strong winds, conditions were perfect. Dom Pérignon Vintage 2008 took time to reveal itself, like the fruit that ripened late.

This exceptional cuvée is made from a secret blend of Pinot Noir and Chardonnay.

On the nose, Dom Pérignon Vintage Edition Lenny Kravitz 2008 reveals a complex and luminous bouquet. Aromas of white flowers, citrus and stone fruits are sustained by notes of anise and crushed mint.

On the palate, the consistency with the nose is remarkable. It is a slender, clean and invigorating wine. With the sharp acidity and aromatic purity expected from the 2008 vintage, Dom Pérignon Vintage 2008 brings fullness and warmth thanks to an aromatic, grey and smoky persistence in the mouth. An exceptional champagne resulting from the artistic collaboration between Lenny Kravitz and Dom Pérignon, to be discovered without further ado.

Parker
96+
100
Wine Advocate-Parker :
The finest release of this iconic cuvée since the 1996 vintage, the 2008 Dom Pérignon wafts from the glass with an incipiently complex bouquet of Meyer lemon, green apple, dried white flowers and oyster shell, with only subtle hints of the smoky, autolytic aromas that have been such a prominent signature of recent releases. On the palate, the wine is medium to full-bodied, deep and complete, its notable flesh and amplitude controlled by incisive acids, with a youthfully exuberant but elegant mousse and a long, beautifully delineated finish. Considering the sheer size of this cuvée, it's a remarkable achievement and a fitting release with which to conclude Richard Geoffroy's tenure as chef de cave. Given the 2008's intensity and balance, I suspect purists will be anticipating later disgorgements with lower dosage and more time on the lees with particular enthusiasm. Tasted three times, with consistent results.
Other wines that Could be of interest to you