Wines from Centenarian Vines in the Mythical Landscape of Priorat 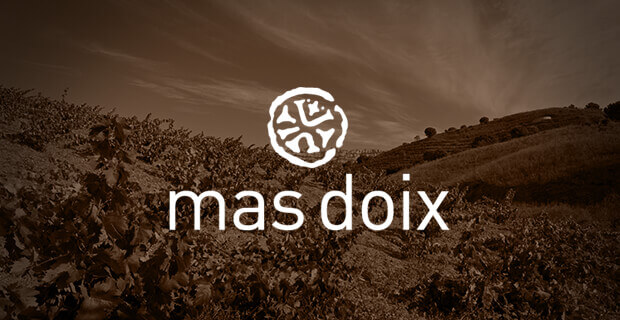 Clinging tightly to the steep, windy slopes of the DOQ/DOCa Priorat, the resistant bush vines of the Mas Doix estate have quite a story to tell. Planted by Juan Extrems Doix shortly after the phylloxera epidemic wreaked havoc on the region at the end of the 19th century, many of these vines are today well over 80 years old and some of them even over 100. They extend their roots deep into Priorat’s emblematic slate or schist (locally: llicorella) soils, producing an extremely limited yield of exquisitely concentrated Grenache and Carignan grapes each year. In 1998, the Doix and Llagostera families founded the Mas Doix winery, producing four beautiful wines from vines they have looked after for over a century. Les Crestes, Salanques, Doix and 1902 offer the opportunity to taste this remote, rugged terroir expressed through wines of great elegance and never-ending layers of ripe black fruit flavour.

The Hundred-Year History of the Vines of Mas Doix

A close look at Priorat’s cataclysmic landscape reveals the many stories behind its ancient winemaking tradition. The sun sets over the vineyards, illuminating steep hillsides ribbed with a network of terraces, believed to have been originally built during the age of the Roman Empire. Most of these terraces have since been overgrown by dense forest, patches of green that recall the devastation of phylloxera at the end of the 19th century and the thousands of hectares of vines that were completely wiped out as a consequence. And in the foothills of the Montsant, ruins of the 12th century Escaladei Monastery remind locals of a time when thirsty Carthusian monks planted vines, led by their Prior, from whom the region inherited its name.

But despite this long history of winemaking in the region, most of the wineries in Priorat today came into operation relatively recently, at the end of the 20th century. After phylloxera, which led to a large scale emigration of residents to nearby cities, and the Spanish Civil War that followed, those few families who remained in Priorat turned to less-risky bulk production in village cooperatives. It was only after around 1985 that winemakers shifted from bulk production to estate bottling, encouraged by the historical Scala Dei winery and the success of pioneer winemakers like Rene Barbier of Clos Mogador, Alvaro Palacios and Daphne Glorian. While the Doix and Llagostera families had been cultivating vines and producing wines as early as 1850, even obtaining a gold medal at the Universal Exhibition of Barcelona in 1888 and the silver medal in Paris in 1878, it was only in 1998 that they established Celler Mas Doix. The winery is currently run by Sandra Doix, whose great-grandfather Juan Extrems Doix replanted this land with native Grenache (Garnacha in Spanish, Garnatxa in Catalan) and Carignan (Cariñena in Spanish, Samsó in Catalan) vines shortly after phylloxera. Thanks to his dedication to the vines and his back-breaking labour, the production of these vines was maintained throughout the 20th century, with the fruit sold to the cooperative of Poboleda. It is these vines, over one hundred years old, which provide fruit for the great 1902 cuvée at the Mas Doix winery today.

In just 2 decades, the heirs of the Doix and Llagostera families have earned international recognition through their four signature labels, truly representative of the region’s magnificent potential. Aided by the DOQ/DOCa title granted to Priorat (in the year 2000 in Catalunya and 2009 in Spain), as well as the famously high notes awarded to its top wines by Robert Parker, Priorat has recently re-emerged as a must-know region, and the wines of Mas Doix offer a great introduction.

A Rugged Terroir in Poboleda

The Mas Doix winery is located at the entrance of Poboleda, one of the nine villages included in the DOQ (DOCa) Priorat appellation in the Tarragona province of southern Catalonia in north-eastern Spain. The major geographical features of this area include the Montsant Mountain range to the east and the Siurana River in the south, which carves out a trail surrounded by hills. Of the 17.628 hectares total included in the appellation, around 1.900 hectares (or 12%) is planted to the grapevine. Mas Doix is one of just 104 wineries in the Priorat appellation.

The climate of Priorat is largely a blend of Mediterranean (due its proximity to the coast, resulting in dry summers and winters with wetter springs and autumns) and continental (due to the location of the appellation inland and the high elevation of its vineyards, bringing low temperatures during winter and a high degree of difference between daytime and night-time temperatures). Poboleda, in the north-eastern part of Priorat, has one of the coolest microclimates, harvesting 8-10 days later, on average, than wineries further south. A south-easterly Mediterranean sea breeze, locally nicknamed Garbinada, also lessens the effects of dryness and heat during the summertime. Meanwhile, a dry and cold north-westerly wind slows down the ripening and contributes to the high acidity in the wines of Mas Doix. The average rainfall is just over 500-600 L per square metre, with almost 0 precipitation during the summer and no irrigation drastically reducing the yield of the vines here, allowing for the production of highly concentrated, intensely flavourful wines.

But perhaps the single most emblematic feature of this terroir is the soil, a kind of decomposed slate and schist locally known as llicorella. Containing only around 2% organic material and offering incredibly water drainage, this rugged soil forces the vines to stretch their roots deep, possible because of the porous and brittle nature of the schist. This llicorella has been recognised as having the most influence over the unique personality that all Priorat wines have in common, and those of Mas Doix are no exception.

In total, Mas Doix owns 20 hectares of vineyards and additionally cultivates and harvests from 10 hectares of vines not owned by the estate. Out of the six sites they cultivate, three lend their name to the estate’s cuvées: Crestes, Salanques and Doix. The Crestes site is the youngest, home to 50-year-old Carignan and Grenache and 20-year-old Grenache and Syrah. Salanques is planted with 70-90 year old Carignan and Grenache. The oldest and most precious of the estate’s vineyards is named Doix, home to Carignan bush vines planted in 1902 and Grenache bush vines planted in the 1910’s. Grapes from this site are used to produce the Doix and 1902 cuvées.

Harvest at Mas Doix is carried out manually, quite a laborious task, considering the steep incline of the hillside vineyards. The grapes are brought to the cellars and fermented in stainless steel tanks, with maceration lasting between 18 and 35 days. The entry-level Crestes is a blend of around 80% Grenache, 10% Carignan and 10% Syrah, aged for 8 months in second year French oak barrels. With its outstanding notes of black cherries, blackberries and graphite, this wine offers a great value for the region. Salanques is a blend of around 65% old Grenache, 15% old Carignan and the rest composed of younger Syrah, Merlot and Cabernet Sauvignon, whose exact proportion varies by vintage. Following 3-4 weeks of maceration, this wine is aged in French oak for 14 months.

The estate’s namesake Doix cuvée is a blend of 55% Carignan and 45% Grenache from the Doix vineyards, harvested from vines between 80 and 105 years old. After a 24-day maceration and excellent extraction, the wine ages in fine-grain new French oak barrels for 16 months. Mas Doix producers only around 5,000 bottles of this wine, layered with beautiful dark fruit and red berries, per year. Finally, the very special 1902 is made of 100% centenary Carignan from vines planted in the year 1902. The yield is naturally limited to only 300 gr per vine and only around 850 bottles of this wine are producer per year. This very concentrated and harmonious Priorat wine is aged for around 16 months in new French oak, and offers a beautiful expression of old-vine Carignan.