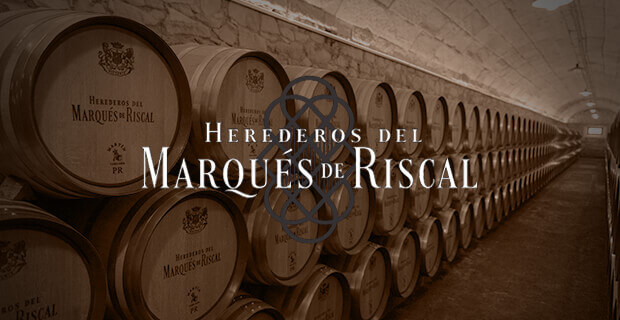 The History of Heredos del Marqués de Riscal: a Pioneer in Rioja

Unparalleled both in the story of its past and in the great steps taken towards its future, Marqués de Riscal has always been a true pioneer in the Spain’s DOCa Rioja appellation. The property itself is one of the easiest in the world to recognise, as its magnificent City of Wine complex is home not only to the family’s ancient cellar but also to the one-of-a-kind luxury hotel designed by Frank Gehry, a 1 Michelin star restaurant and award-winning vinotherapy spa. The remarkable Spanish wines of Marqués de Riscal blend the indigenous grape varieties of the region – predominantly Tempranillo with touches of Graciano and Mazuelo – to produce concentrated, elegant and powerful red wines, fit for the greatest feasts. Along with classics - the Reserva and Gran Reserva - the team at Heredos del Marqués de Riscal also produces wines with a significant portion of Cabernet Sauvignon and ages many of their blends in French oak barrels – a testament to the winery’s historical ties to the Bordeaux wine region.

As the oldest firm in Spain’s famous DOCa Rioja appellation, Marqués de Riscal has an undeniable legacy. In 1958, Don Guillermo Hurtado de Amezaga, Marqués de Riscal and an avid diplomat and writer, was commissioned by the government of the Alava region to convince the wine producers of Northern Spain to adopt the winemaking methods used in Bordeaux’s Medoc region, in order to improve quality and make the wines more marketable. At that time, Amezaga already owned vineyard land and a winery in Elciego, but lived in Bordeaux. He decided to collaborate with Jean Pinneau, the winemaker at the time of Chateau Lanessan, who met him in Elciego with cuttings of Cabernet Sauvignon, Merlot, Malbec and Pinot Noir from Bordeaux. The two experimented with cultivating these French varieties in Spanish soil, planting some of the very first Cabernet Sauvignon vines in Spain. They were also the first to use French oak barrels from Bordeaux, which added longevity and consistency to the wines. The first wines were bottled in 1862 and achieved both national and international fame shortly after. Marqués de Riscal was the first non-French wine to receive the diploma of honour at the Bordeaux Exhibition in 1895 and quickly became the favourite wine of King Alfonso XII. The winery remains one of the suppliers of the royal family today. Since its very inception, the Marqués de Riscal has truly served as a pioneer in Rioja, even introducing the very first grape sorting table of the appellation in 1995.

At the turn of the 21st century, the Marqués de Riscal winery unveiled a colossal and unprecedented project: a modernistic building complex called the City of Wine, which would become one of the most internationally known wine tourism destinations and architectural landmarks in Spain. In order to make their dream a reality, the Heredos del Marques de Riscal reached out to Canadian architect Frank Gehry, best known for the Guggenheim Museum in Bilbao and the Louis Vuitton Foundation in Paris. A bottle of wine from the architect’s birth year was sent along with the proposal, to help sway his decision… (It worked.)

In 2006, the City of Wine was officially inaugurated, a stunning display of the values central to the winery’s core philosophy - a seamless combination of tradition and modernity united in the same building. The 100,000 square meter complex centres around the winery’s oldest cellars, which date back to 1858, as well as the 1883 extension. The original cellar is home to what is considered the most complete wine library in the country, nicknamed “The Cathedral,” whose corridors hold every vintage produced by the property since 1862. The innovative spirit of the company is perfectly captured by the 43-room Marqués de Riscal luxury hotel, a Frank Gehry masterpiece covered in undulating sheets of titanium and infused with the signature colours – pink, gold and silver – found inside and on the label of the winery’s bottles. The complex also includes a vinotherapy spa operated by Caudalie and two restaurants run by Michelin-starred chef Francis Paniego. One of the restaurant received a Michelin Star in 2011. Surrounded in every direction by the vineyards of Marqués de Riscal, the City of Wine offers an unbeatable “home base” for discovering the Rioja wine region and attracts roughly 70,000 visitors per year to the property.

Going forward, the winery has placed even greater focus on the quality of its production, transforming its 1883 cellar with the latest technology.

A Word on the Rioja Alavesa Terroir

Currently, the fruit used to produce the famous wines of Marqués de Riscal are grown on a total of 1,500 hectares, of which 500 hectares is owned by the company and the rest externally, but with viticulture directed by the company. The property is located in one of the three sub-regions of Rioja, named Rioja Alavesa, between Elciego and the villages of Leza, Laguardia and Villabuena. Out of the three sub regions, Rioja Alavesa has the highest elevation and is known for its very distinctive chalky clay and clay-limestone soils, as well as its sloping landscape, which offers excellent drainage. The soil is widely credited with producing wines with full body and high acidity, leading to great complexity and ageing potential. Four main red grape varieties are cultivated in this region by Marqués de Riscal: the predominant indigenous Tempranillo, late-ripening and hardy Graciano, Mazuelo and the French classic Cabernet Sauvignon. This region is most significantly affected by an Atlantic climate but also enjoys heat and moisture from Mediterranean regions in the east.

Spotlight on the Legendary Spanish Wines of Marqués de Riscal

Perhaps the most representative wine of the Marqués de Riscal line is their flagship Marqués de Riscal Reserva label, representing the traditional style of the Rioja region. This wine is produced from mainly Tempranillo grapes from vines planted before the 1970’s, in the very best clay and limestone soils of the Rioja Alavesa region. The blend also includes around 10% combined of Graciano and Mazuelo varieties, which add a crisp touch and enhanced colour to the finished wine. The fermentation for the Marqués de Riscal Reserva is carried out at a controlled temperature of 26°C and maceration does not exceed 12 days. The wine is matured in barrels of American oak for around 2 years, contributing to the age-worthy, elegant and fresh nature of this classic Rioja wine.  As is typical for the Reserva wines of Spain, the Marqués de Riscal Reserva ages in bottle for at least one year before release, allowing for the tannins to become well-rounded and for the complexity of the fruit to be expressed to the fullest. The nose of lush black fruit is accented by aromas of liquorice, black pepper and cinnamon in a wine with polished tannins and a long, balsamic-touched finish.

The Marqués de Riscal Gran Reserva is also produced with around 90% Tempranillo and 10% combined of Graciano and Mazuelo, this time from vines over 80 years old, sourced from estate vineyards, as well as from the winery’s partnered growers. The vinification is carried out in a way similar to that of the Reserva. What changes with the Gran Reserva is the ageing program: the blend spends between 2.5 and 3 years in French oak casks, followed by 3 additional years in the bottle before release. This wine is truly intense, revealing complex balsamic and toasted aromas on the nose, along with round and concentrated tannins on the palate.

The year 1986 marked the release of the first vintage of Barón de Chirel by Marqués de Riscal, the result of an experiment by the winery to produce a wine from low-yield and very high-quality vines between 80 and 110 years old, planted in the 3-hectare Las Tapias vineyard. The production of Barón de Chirel is limited to only the very best years, in which the wine can clearly express the true character of its terroir of origin, as well as the vintage and grape varieties which compose it. While the blend is dominated, once again, by the region’s signature Tempranillo, Barón de Chirel also includes a significant percentage of Cabernet Sauvignon. Alcoholic fermentation of this wine is carried out at a controlled temperature of 26°C in Allier oak vats, followed by malolactic fermentation in fine-grained Allier oak casks. The blend is matured between 18 and 24 months in oak casks, with the exact time length depending on the characteristics of the vintage. The wine is also aged in bottle for at least 2 years before release. The result is a powerful and intense red wine with spicy, toasted notes from the oak and plenty of jammy dark berry flavour. The silky-smooth tannins and beautifully balanced acidity make it the perfect pairing with a feast of roasted partridge, rabbit or boar. In recent years, the volume of production for Barón de Chirel has drastically reduced from 6-figures to only around 10,000 bottles per vintage.

More recently, with the 2006 vintage, Marqués de Riscal has also launched Finca Torrea, a more approachable, “modern” wine made with 100% new French oak and aged for 14 months. This is a blend of Tempranillo and Graciano fruit made from the Torrea property, immediately surrounding the winery and hotel. Starting in 1972, Marqués de Riscal has produced white wines made with Verdejo and Sauvignon Blanc grapes from a total of 480 hectares in the DO Rueda, of which around 230 hectares is owned by the company. The family also owns 198 hectares in the Toro appellation of vines planted in the gravel soils of the terraces above the Duero River. The grapes are used to produce the Riscam Tempranillo (launched with the 1998 vintage) and the Barón de Chirel Verdejo.

Today the wines of Marqués de Riscal can be found in over 100 countries, with the winery exporting more than 60% of its production.